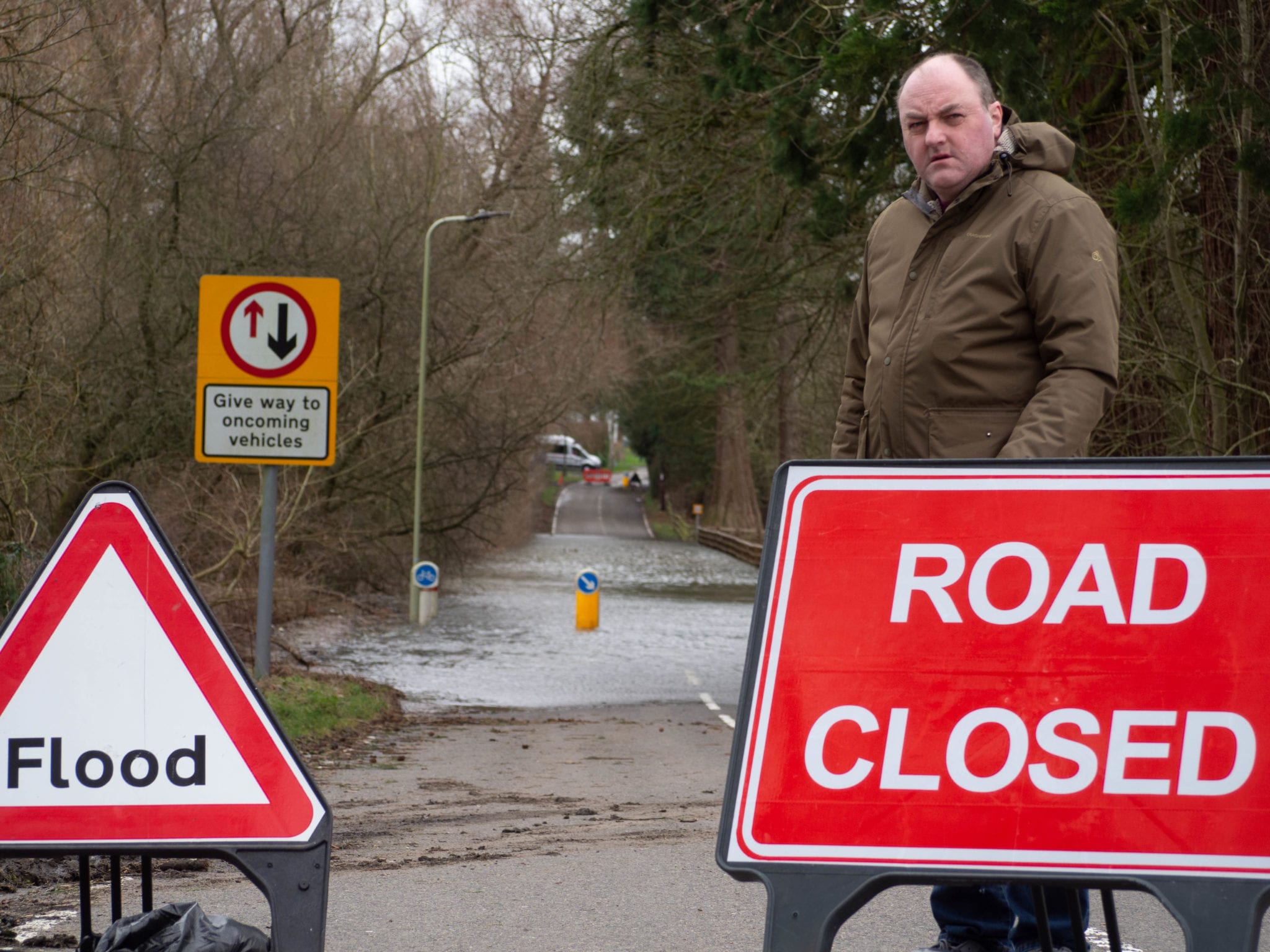 In what seems like an age away now, Shropshire was swamped by floodwater. The latest flooding crisis to hit the county, last February, was only a few short weeks ago. For now, the Government and Shropshire Council have bigger worries with Coronavirus, but they mustn’t forget to take real action on floods & SuDS before the next flooding crisis.

As a Civil Engineering Surveyor of 30+ years, I have worked for the National Rivers Authority and the Environment Agency on many flood prevention projects. I have modelled many watercourses, their tributaries and their floodplains including The River Severn, The River Teme, The River Tame, The River Tyne, The River Taff, The River Dee, The River Trent, The River Stour, Afon Glaslyn, The River Elwy and The River Thames to name drop a few. The fact that the solutions to flooding have been catalogued for years are still there is no real action on flooding. Politicians make all the noises in a crisis but consistently fail to act on prevention or waste money on expensive engineering schemes. It makes my blood boil.

Deja Vu: We have been here before and we still aren’t learning the lessons

While I have been a councillor we have seen significant flooding in 2001, 2007, 2015 and now 2020. Indeed Shropshire long history of floods. Shropshire Council, The Environment Agency and the Government need to keep flooding plans in mind. If flooding is forgotten as an issue, again, then when the rains next fall, as rain inevitably will, then risk to life, business and property is also inevitable. Prevention is better than crisis management. Putting in place good policies now and encouraging good practice now across the whole River Severn catchment is essential. Unnecessary risk to life, businesses and property that is avoidable can’t be condoned.

Back in 2001, we had another big episode of flooding. There have been two other big floods between 2001 and 2020. When I was a County Councillor for Bridgnorth, as part of the Community and Environment scrutiny committee work, we examined the flooding issue, received evidence and produced a report. The conclusions of the 2001 report were the need to develop a ‘whole catchment’ plan for the River Severn. Porous surfaces and other drainage attenuation on developments to reduce run-off and ‘slow the flow’. Research then showed that changing farming practice – reduced sheep grazing on Welsh hill farms, returning drained land back to marshland, and tree planting – would also slow the flow.

By retaining heavy rainwater nearer to its source for longer the pressure is taken off downstream floodplains. By slowing the flow downstream from the source large peaks are reduced and spread out. Often in peak flood conditions, heavy rainfall over several days on the already saturated ground has a compound effect. Rainfall on the welsh hills takes time to get to the heart of Shropshire. That means the peak flow is a few days after the rain has fallen. With consecutive days of heavy rain that peak coincides with more local peak flows from local rainfall.

Runoff from grazed land or saturated land is higher as water doesn’t percolate into the groundwater. Marshland, tree, undergrowth and long grasses encourage rain to seep into the groundwater. Groundwater eventually gets to the river by this process is much much slower. Similarly, runoff from urban development is quickly removed into drainage systems and transport quickly to the river catchment. Conversely, in development with porous surfaces, water percolates straight into the ground locally, slowing progress to the river catchment. Adding marshland, paying farms to flood, and adding leaky dams in streams and ditches all have a part to play in slowing the flow.

Floodwater doesn’t flow. The channel does but the floodplain is basically a slow-moving lake.
Floodwater rises from the water table, not from River bursting their banks so flood preventing has to address water rising through drainage and cellars.
Bridges and other structures in the floodplain act like dams in flood conditions causing water to back up.
Daming effects start to happen at 75% capacity on pipes or bridge arches not at 100% capacity because of resistance. This is magnified when they aren’t normal to the flow.
Dredging isn’t the answer. It is also always thrown around as an answer. It sounds good and it sounds plausible but it is only temporary, destroys the habitat. It won’t create the volume and it just fills back up again. Cleaning the channel reduces resistance and does increase the flow but that only pushes the problem further downstream.
Extended periods of extreme rainfall are already seven times more likely than in pre-industrial times.
More than 5.2 million people in the UK live and work in 2.7 million properties that are at risk of flooding from rivers or the sea, 3 million are also at risk of surface water flooding, and 200,000 are at risk of groundwater flooding.
Only 10% of floodplains continue to provide their natural flood attenuation function.
42% of floodplains in England and Wales are separated from their rivers, largely by engineering. Part of this problem arises from granting of planning permission for housebuilding – residential development of floodplains has grown by 1.2% since 2011, 0.5% faster than other areas.
During a storm 3 baths fulls of rainfall can fall on a drive
Runoff picks up pollutants which contaminate our rivers.

As an aside: This seems like an appropriate moment to mentioned the North West Relief Road (NWRR)

In effect, if the much-lauded North West Relief Road (NWRR) around Shrewsbury is built, is poorly designed and doesn’t accommodate the volume needed at the crossing point over The River Severn it will act as a dam. This will cause more flooding in Melverley and the land north of Shrewsbury. Shrewsbury’s MP wants to turn the NWRR into a dam. This is madness of the highest order. This isn’t the first time it has been suggested. The same idea was floated and then rejected by the Environment Agency as uneconomic in 2009.
During the recent floods the Environment agency has been quoted to say: “470 tonnes of water a second were flowing through Ironbridge. Storing that volume for (say) a day means the storage needs to have a volume of 40.6 million cubic metres – say an area of 10km by 1 km flooded to a depth of 4 metres.”
You don’t solve flooding by displacing the volume. You have to manage the whole catchment and slow the flow of the whole catchment and reduce peak volumes to be effective.

Water management is a vital aspect of good town planning.  Planning for water provides opportunities to design our towns and cities to be greener, healthier, more attractive, more biodiverse and more resilient to climate change. Development can have significant impacts on water use and water network capacity affecting water resources, wastewater disposal and flood risk.

Shropshire Council Planners and The Government for that matter, need to make SuDS a condition of every application within The River Severn catchment. They have been poor at applying policy in a constructive way to development within the catchment to slow the flow. As with most things in planning terms, if you actually want to control anything then you need robust policies to control development. On its own developers wouldn’t choose to develop in a sustainable way. All developments within a flood zone have extra hurdles to gain permission. That doesn’t mean no development. It just means that risk has to be managed properly.

NPPF 15. Conserving and enhancing the natural environment 170. Planning policies and decisions should contribute to and enhance the natural and local environment by:
e) preventing new and existing development from contributing to, being put at unacceptable risk from, or being adversely affected by, unacceptable levels of soil, air, water or noise pollution or land instability. Development should, wherever possible, help to improve local environmental conditions such as air and water quality, taking into account relevant information such as river basin management plans

The Environment Agency 2009 River Catchment Management Plan for Shropshire was very hands-off when it came to policy, with a graduated response within the catchment plan, rather than the blanket approach required. The Environment Agency 2015 Severn river basin district River basin management plan focused on catchment partnerships to deliver specific projects. The combination of the 2015 plan and the NPPF’s weak “wherever possible” wording in practice means nowhere except in flood zones. National Planning Policy Framework should explicitly require flood mitigation for any development within the River Severn catchment. So Shropshire Council’s policies aren’t robust enough to insist on SuDS on all development. This is something that needs fixing quickly before we have another flooding crisis.

Below is a great video from susdrain/CIRIA about where rain water goes. During a storm 3 bath fulls of water can fall on a drive. Multiply that up by thousands of houses, roofs and roads entering drainage systems and that is a lot of water flooding into The River Severn.

Want to see how a porous surface can help prevent storm rainwater getting into a river in minutes? This video shows 4,000 litres of water absorbed by porous asphalt in 60 seconds. The water goes into the ground water to slowly percolate into the river system. Planners should insist on SuDS EVERYWHERE in the river catchment area.