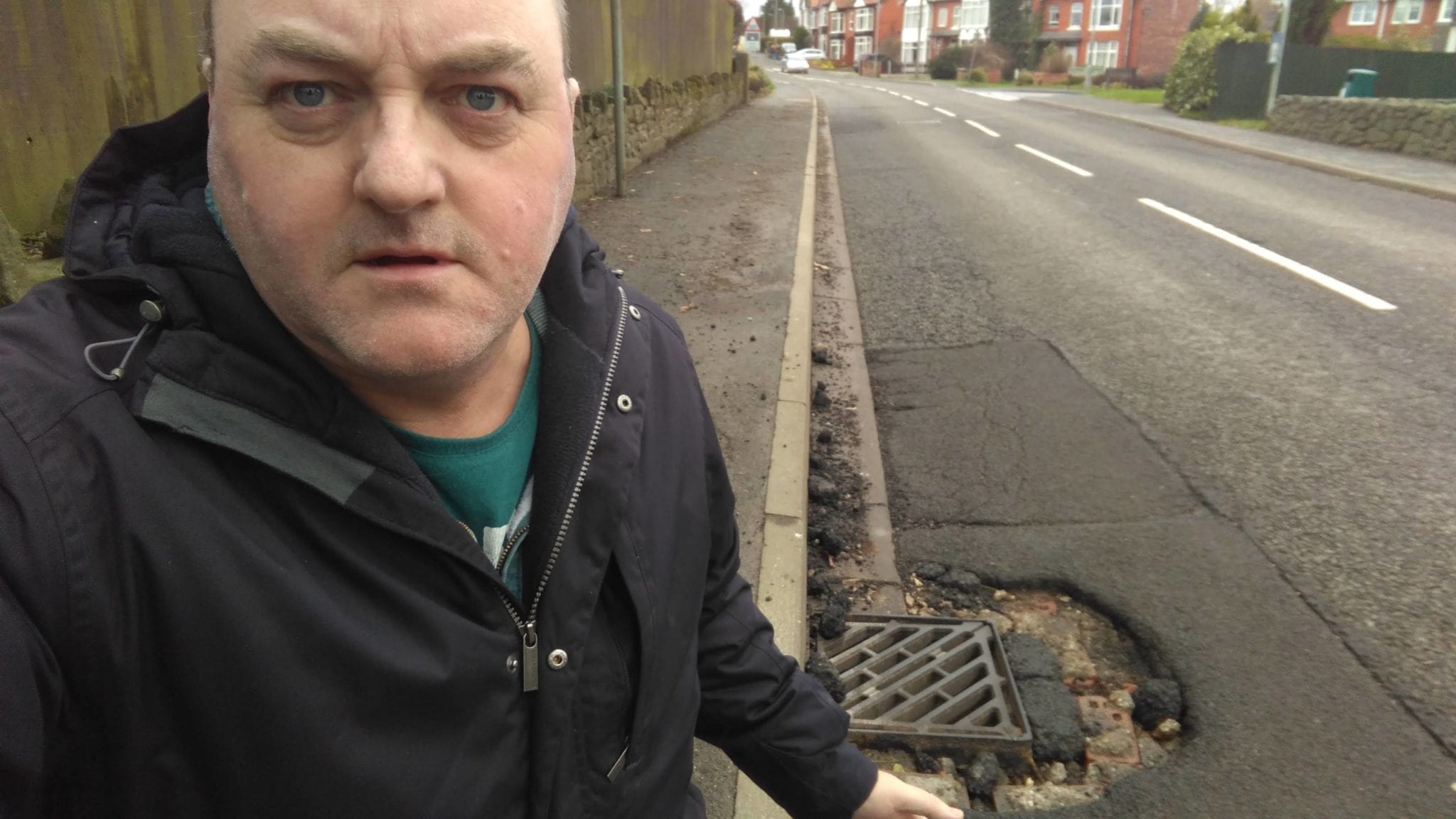 Over recent weeks and months, the pothole plague has been spreading with a vengeance. More people than ever are complaining about the state of the roads. More people are making insurance claims for vehicle damage… and more claims are being dismissed by Shropshire Council out of hand. Shropshire Council pays out for just 1% of pothole claims. It relies on a defence that it has taken the “reasonable care” required under the Highways Act. In essence, if a council didn’t know about a pothole then can avoid a claim. Reports regularly boast of their success in rebuffing claims, but this is nothing to boast about.

How to make a pothole claim?

Shropshire Council have a pothole maintenace page with an attached pdf claim form.

When reporting take photos, where safe to do so, using a prop for scale. It is important to measure the size (width, length and depth). Using a spirit level can help to accurately gauge the size and is the accepted method to measure a pothole’s depth. If no action is taken and or the codition gets worse or is unsafe, report it again.

How do potholes form?

This isn’t how it should be and we all expect better. Other counties are also having big problems with potholes but everybody can see that Shropshire’s are far worse. That comes down to the strategic decisions of the Conservative-run Shropshire Council. Yes, we have a huge road network. Yes, Shropshire gets a poor deal from the Government. Yes, Shropshire is the largest inland county in England. But at every level of government, the Conservatives control the levers of power and have for ages, so at some point, the Conservatives have to shoulder the blame for the appalling condition of our roads.

As a Civil Engineering Surveyor of 30+ years who has worked on many major and minor road projects, I always find Conservative-run Shropshire Council’s approach to roads deeply frustrating and bewildering. Favouring short-term fudge over long-term maintenance is the road to ruin.

Shropshire Council has done a shocking job of managing the situation. Cutting £5m out of the roads budget, multiple times. Changing contractor when the last contractor was failing. Yet, the Conservatives scrapped the area approach when they set the new contract with Keir.

Keir as their contractor has basically just done what they were contracted to do… Literally. So if they saw a pothole next to one they had gone out to repair, they left it alone as it wasn’t instructed. Even though that meant a return visit to address it on another day. All too often using temporary fill instead of doing a proper job. Permanent filling without proper jointing, sealing and filling, in reality, means a less than permanent fill and more return visits.

Far too often potholes are ignored because of their selection criteria. Yet they grow into a much bigger problem quickly. This means yet more extra journeys. Neglected potholes become a bigger more costly problem to fix and increased insurance claims. Far better to prevent the forming in the first place through proper planned roads maintenance.

With barely more than a dozen teams, constantly crisscrossing themselves, it is no wonder they built up a backlog. The backlog was reported as being a backlog of 3,500 potholes earlier in the year. However, currently, the backlog stands at 4,500 potholes. Crazy! Apparently, the contractor has already spent overspent this year by £6m. £21m in total – higher than the previous years budget as well. Yet our roads are worse than ever.

So to deal with a crisis of their own making the Conservatives opted to draft in a ‘pothole’ consultant and pay out the princely sum of £1,000 per day for the privilege. At a briefing that I attended the consultant explained he was changing the approach back to the one the previous contractors prior to the end of their term. He explained he was effectively trebling the number of teams to deal with the backlog. Both changes are significant variations to the contract. These changes plus the estimated £130,000 for the consultant will blow the budget wide apart.

All a ludicrous waste of time, energy and money.

The Conservatives cut the roads budget from £20m to £15m and expected the new contractor to do more for less money. There has been very little oversight of the contract. Most Shropshire Council Councillors haven’t even seen the contract. They certainly weren’t privy to how it was set up and they have been severely hampered in scrutinizing it in operation. Shropshire’s Conservative administration has operated as control freaks and has shut down scrutiny for years, even from some of their own members.

In recent weeks we have seen a string of scandals bringing the council into disrepute and making the council a national laughing stock. All on the watch of the portfolio holder, Cllr Steve Davenport, who said on TV that he was in charge but couldn’t change anything. A nonsensical position if ever there was one. He is the principal person with oversight and control of the contract. After multiple failures with multiple contractors, he should do the decent thing and simply resign. Any person with their spine removed, would have more control of their portfolio than he does. Shameful.

The recent controversy over the resurfacing of a senior councillor’s lane in Trefonen that wasn’t in the work programme didn’t look good. In many quarters members of the public consider councillors to be on the fiddle and a generally rotten bunch. This is probably far from the truth for the vast majority of councillors but stories like this don’t help matters and give us all a bad name. The lane in question is about 1 mile long or 1.6km. To put that in context, the planned resurfacing for the whole of Shropshire for the 2020/2021 year is 4km! The lane cost £80,000 to resurface. Next year’s capital budget for resurfacing is £500,000. Just how did a lane, that wasn’t in the programme, manage to get funded? Am I to expect our lane, which is also not in the programme, to be done any day now!

A whistleblower at the Highways Department told Shrewsbury Councillor, David Vasmer, how the council was failing to manage Kier. David said: “Kier is failing to carry out necessary work on the ground despite receiving many thousands of pounds of tax-payers money.”

“An Audit Report has now been carried out. It confirmed the claims made by the whistleblower.” David said.

Multiple management failures with multiple contactors make you question the competence of the people at the top. Ultimately that means the portfolio holder and the administration councillors who signed off on the Keir contract.

Given all of the above, it is hardly surprising that Shropshire Lib Dems have demanded the resignation of the councillor in charge. At the last full council meeting at Shropshire Council, Lib Dems put forward a motion calling for Cllr Steve Davenport to resign. Prior to the meeting Cllr Davenport refuted the claims and refused to resign. At the meeting, the administration closed ranks and dismissed the motion without debate.

In the latest capital programme, it is full to bursting with 91km of surface dressing projects. Surface Dressing looks nice initially but it only lasts for 2 or 3 years – 5 at the absolute best. Surface dressing is the cheapest and lowest grade maintenance option. It can temporarily improve traction and prevent excessive skidding. It does paper over cracks stopping water getting into the crack. However, just look at the state of Shrewsbury Road in Oswestry to see a particularly bad example of Surface Dressing failure.

As the largest inland county in England, Shropshire has 6,500km of roads. Our roads are a mess because ‘surface dressing’ is done instead of proper resurfacing… Putting off the inevitable and allowing bigger structural problems to grow.

Only properly resurfacing 0.06% of Shropshire roads is potty.
At that rate, it would take 1.5 thousand years to resurface all of the counties roads!!

I have previously called for Shropshire Council to investigate plastic roads. Other councils are using recycled plastic to replace oil-based bitumen binding in road construction. Recycled glass could be used to replace sub-base aggregates as well. Reusing materials is an improvement environmentally, especially if it replaces fossil fuel. Plastic roads are stronger and longer-lasting.

Local Lib Dems demand better than our roads falling apart. Shropshire Council needs to do more to cut waste by instigating an efficient long-term programme of works that cuts pothole claims. The Conservatives may claim to be working hard to fix the roads but the evidence is plain for everybody to see every day.