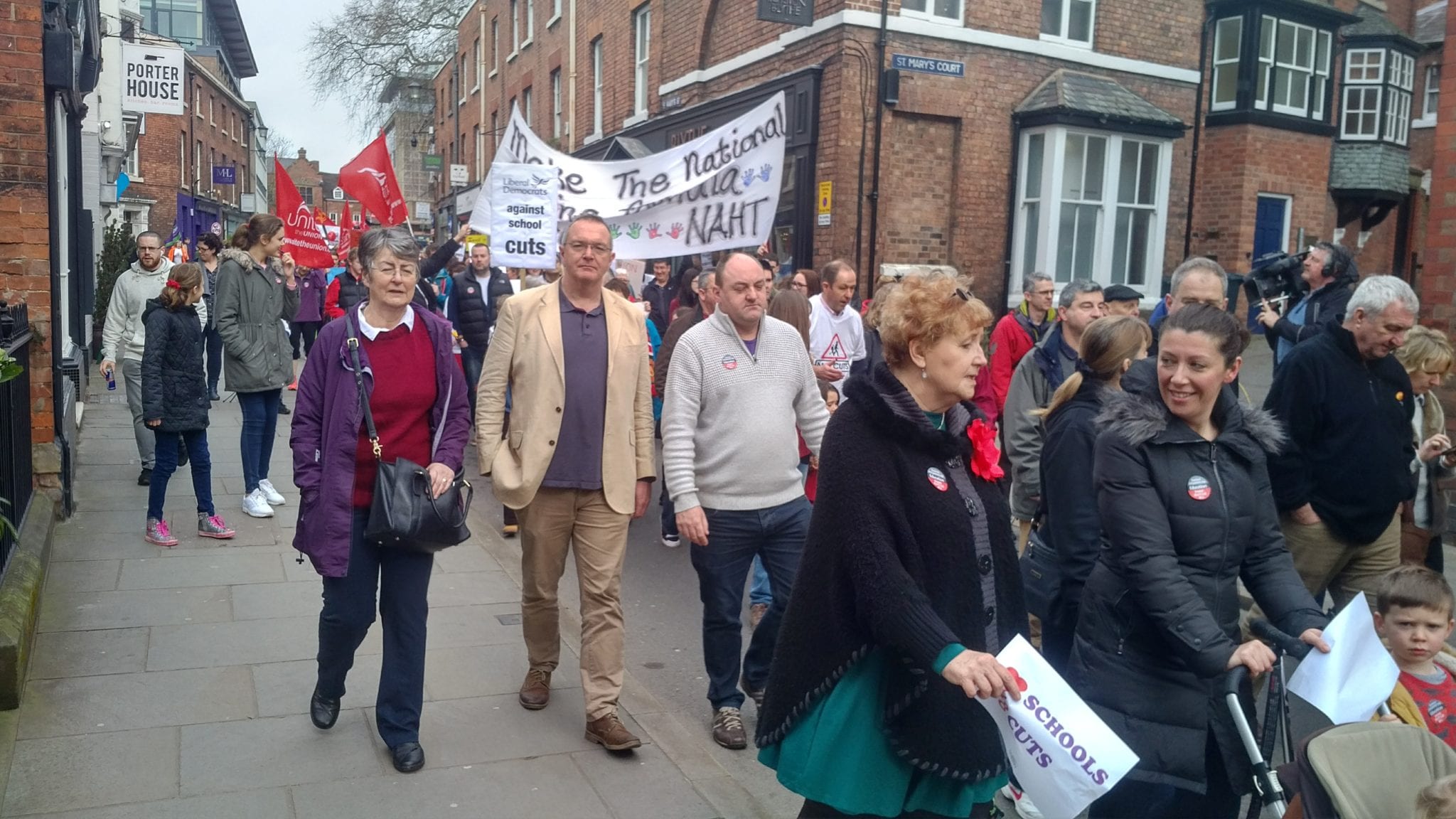 This month I have been on two marches organised to defend local services from Conservatives cuts. Strangely, no Conservative MPs were present at the march. Conservative Councillors were in short supply too. On the 11th I was on the march against £13.4m cuts to schools funding in Shropshire. I joined hundreds of parents, children teachers & concerned members of the public in a March against Conservative school cuts.

As a former Shropshire County Councillor who held an Education Portfolio in the Cabinet, I know how important good education is.

Having a good education is vital for our children’s future life choices. It is the foundation of our economy. We need a well-educated population to improve overall productivity, create wealth and jobs. In the new post-Brexit world this will be even more important!

Following the march yesterday, the fight goes on! pic.twitter.com/k3kIB4bznA

Schools serving Whittington & West Felton are going to lose nearly £1m by 2020 and Shropshire faces losing £13.4m across the county. These figures have been estimated by the NUT.

Shropshire needs fair funding. I made this call a decade ago when I was a councillor. Other areas like ours have consistently received more money than Shropshire for a long time. Despite reviews claiming to bring fair funding Shropshire always misses out. With Conservatives controlling the Government and Shirehall,  you would think they would work together and get this issue sorted out. If we got anything like the money Cornwall gets we wouldn’t see anything like the funding problems we do now.

The Conservative Government are also cutting over £500,000 from our schools. This is on top of the £13.4m. From April our schools are being forced to pay the Apprenticeship Levy. Shropshire Lib Dems asked the Tory Administration to lobby the government to exempt schools but they voted against it.

The Conservative government have scrapped the Educational Support Grant worth £1.2m – local Conservatives councillors voted down a budget amendment from the Lib Dems to scrap £643,000 of local cuts by using money from the Council’s large computing budget.

I am really angry that the Conservatives are clawing back, even more money from our local schools. Money is tight as it is. On top of all this, schools are also seeing rises in the farcical Business Rate changes coming next April. Whittington Primary school rates are going up 22% & West Felton Primary school rates are going up 15%. I imagine the business rate rises will get covered somewhere, so the schools don’t pay it directly, but somebody has to pay it. Schools should be zero rated.

The definition of a false economy.