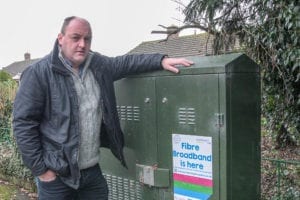 Many moons ago – 15 years ago to be exact – when I was a Councillor for Bridgnorth, I campaigned long and hard to get broadband to Bridgnorth.

It arrived in May 2003 after campaigning for over 3 years. As a County Councillor, I also worked to see the roll-out of Broad Places to increase access to better speeds in dead areas.

2000: BT launched broadband
2006: BT Openreach formed
2008: Broadband takes off & Fibre broadband is launched
2009: 50% of people have access to broadband & government promises broadband for all
2009: Coalition / BT Openreach pledges 24mbps for 90% by 2015
2011: first Gigabit service in the UK
2013: Government delayed 24mbps pledge to 2017 for 95% – 86% were getting over 10mbps
2015: Cameron launched the Universal Service Obligation (USO) to guarantee access for all by 2020. BT Openreach misses their 2.5m target – only 10% had 24mbps
2016: MPs report 5.7m broadband customers not getting 10mbps. Cameron’s 2020 pledge abandoned falling back to USO in rural areas. BT and Openreach are split into two companies.
2017: BT fined £42m by Ofcom for a serious breach of regulations.
2018: BT launches UltraFast Broadband with 100mbps speed guarantee. BT pledges to spend £3m on faster broadband and expand Fibre To The Premises (FTTP). Department for Digital, Culture, Media & Sport pledges full-fibre roll out by 2033… Virgin launches Gigabit broadband in July 2018.
March 2020: BT launches Gigabit full-fibre broadband in UK.

Yet here we are in 2020 still with tons of ‘not spots’ still and availability in Shropshire far far behind the rest of the UK. With Coronavirus more people working at home and having video meetings. Services are largely delivered online now during lockdown. The pressure for good connectivity and speed for EVERYBODY is more important than ever.

Below you will find the news stories for the ongoing campaign for better internet access for everybody. It this day an age having a digital divide and ‘not spots’ is no longer accessible.

Shropshire in the Broadband slow lane

15 years ago I was campaigning to get Broadband into Bridgnorth. I was concerned then about slow speeds were putting us at an economic disadvantage compared to other areas locally… Read More »Shropshire in the Broadband slow lane

Broadband by the numbers

Often the digital divide is discussed and the problem of ‘not spots’ in rural communities. But what does that actually mean here in Whittington and West Felton? Here are the… Read More »Broadband by the numbers