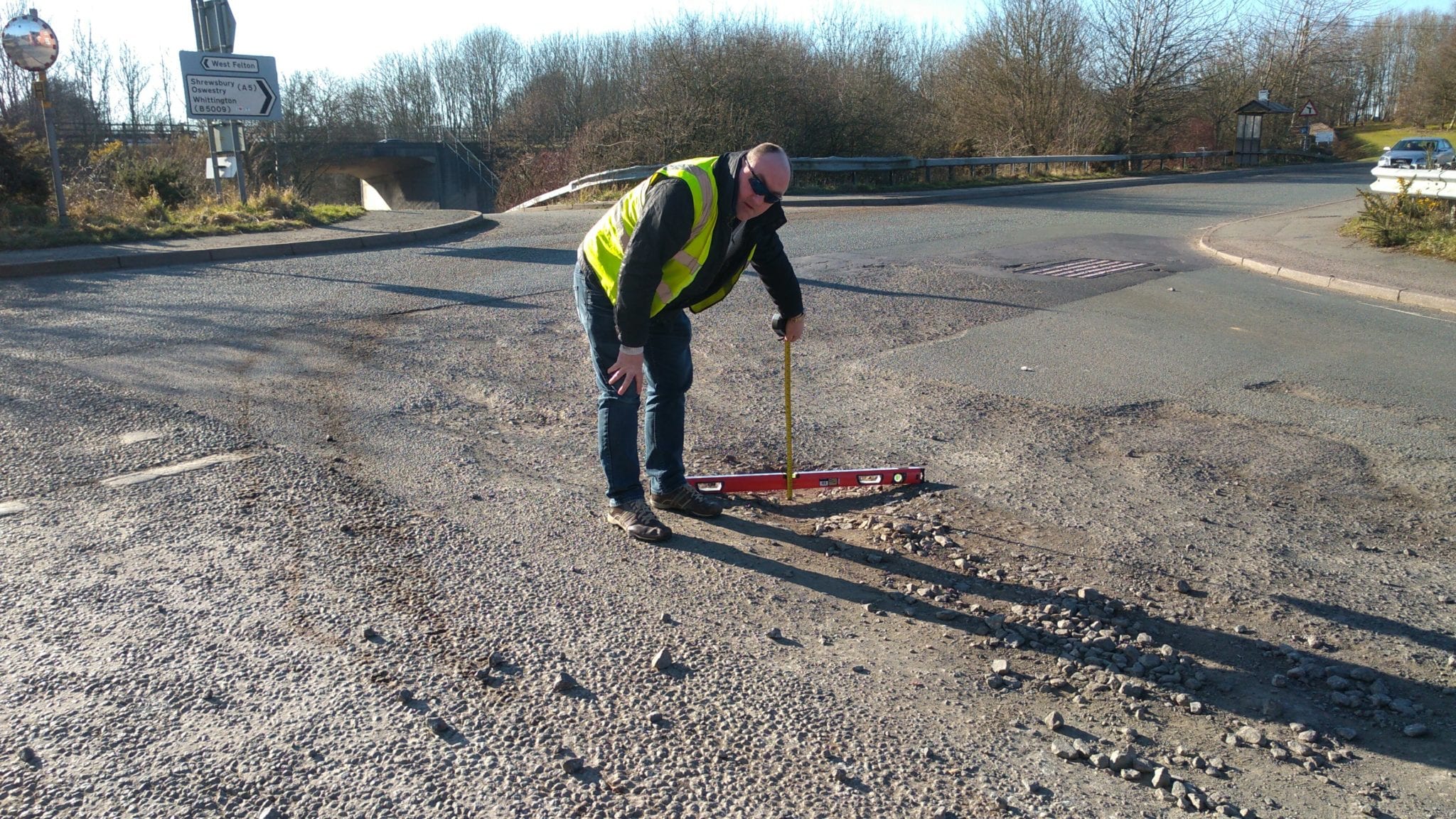 The state of the roads and the growing pothole problem has once again been featured by the national and local media. For decades Shropshire has had a reputation for poor roads, often readily apparent to road users as they crossed the county border.  Yet the Conservatives solution is to make £5m cuts in roads in 2018/19 and in 2019/20!

For Shropshire, they have a colossal road network with some 3,138 miles of road, which has always proven a challenge to maintain. Nearly 3x the bigger the national average and more than double the average for the West Midlands.

One big problem Shropshire Council has is that it doesn’t know the age of its roads!

Every road has a life expectancy – roughly 20-40 years depending on traffic levels. This can be extended by a further 20 years by overlaying or planing off and relaying the top layers. Surface dressing or chipping can extend the life expectancy by 5 years at a time. Eventually, every road needs to be dug up and relayed to reset the clock back to zero. They would need to undertake a massive coring program to have a better idea. So they are stuck in a costly and inefficient cycle of temporary resurfacing. In the short-term re-chipping costs about 1/6th of planing. All of these lifespan numbers vary with traffic volume, axle weights, construction and material quality.
Shropshire hasn’t been great at keeping on top of its road maintenance for years. This shows up most when you compare the condition of the roads across networks with planned work. The % of roads that should have been flagged for maintenance for A roads in Shropshire is about average at 4%. The average in England is 3%. However, for B and C roads is 11% and nearly double the average in England. This shows where Shropshire is spending its maintenance money or more significantly where it is not.
The trend for England is downwards but the Trend for Shropshire on B and C roads, in particular, is getting worse. Bad when you consider where Shropshire was already worse than England average.
You can see The Department of Transport interactive map of the Road Condition in England here.

The Conservatives on Shropshire Council have a £59m black hole in their budget. One way they decided to fix this was by cutting the roads budget by £5m in 2018/19 and another £5m in 2019/20. Potty, given the state of the roads. All road users in Shropshire can see the steady decline in the condition of our roads.
As traffic volumes increase and road maintenance budget reduces, the roads will decay more quickly and the pothole problem will accelerate. This situation is unsustainable. Delays in fixing our roads will only mean higher maintenance costs in the long run. This has been happening for decades because they don’t know how old our roads are but this situation will only get dramatically worse. This will potentially lead to higher insurance claims and more accidents where the condition of the road is a factor.
Today Shropshire council has announced a grant for the Government of £1.86m for pothole repairs. The government announced They previously announced £1.34m of that last year. The additional money is very welcome. However, it quite literally doesn’t even touch the sides compared to the scale of the cuts being made.
The Government and Shropshire Council needs to take a proper grip of the situation or the bills for repairs will grow exponentially. Compared to Other areas Shropshire like all other central funding has always had a bad deal.

Take the pothole at Queens Head/Rednal Mile junction as an example:
In March 2009 the pothole was roughly 1/3 of the size it is now.

Google Street view of the repaired pothole in March 2009

Another Google view of the repaired pothole – coloured Green

Fast forward 9 years and look at how the pothole has grown! Pothole at Queens Head 25th of February 2018. Green is another previous repair attempt. Orange indicates the area of the old repair that has been scrubbed away exposing the binding layer. Red is the area where the scrubbing is so severe that the sub-base is now exposed.

Substandard maintenance, poor materials, excessive wear from the traffic heading to ABP are all a factor in its growth. This sort of damage doesn’t happen overnight. The damage is so severe that the underlying sub-base is exposed. The sub-base is loose aggregate which can be seen scattered across the road. This presents a danger to all road users and an increased skidding risk. Tear wear increases the damage to the road, as more loose material is dug out, as the wheels spin due to lower traction.
I reported the pothole as dangerous to Shirehall. By the 13th of March, the pothole had been temporarily filled in with compacted loose chippings. 13th of March 2018: Compacted loose chippings have been used to fill in the pothole. Even for a temporary repair, it isn’t the best as the puddles indicate. In this situation that repair will only last for a few days.

So I went to have another look a few days later and recorded the above video on the 22nd of March. By the 22nd of March, the temporary repair was already being dug out

Cars and particularly Vans are trending upwards at an accelerating rate, whilst HGVs are ticking down.

Excluding the cars shows the upward trend in LGV or Vans. HGVs are trending down but there is a small uptick in 2015-16.

Overall this shows is the impact of online shopping on journeys and supports what we all know – that retail shops are under severe pressure and that Royal mail delivers many more parcels and fewer letters as more shopping is done online.

What that means for Whittington, West Felton and beyond is worse roads for years to come unless something dramatic happens. Unlikely without a change at local and national level. More expenditure that is out of control and more costly insurance claims. Sub-base aggregate (projectiles) from the pothole thrown across the road and pavement by vehicles presents a hazard and a danger to all road users and adjoining properties.

General wear and tear on roads from increased axle weight, increased traffic volumes, combined with adverse weather conditions – be that too hot or too cold leading to binding tar drying out with age, can all lead to tiny fissures forming in a road surface.

Water penetrated into the surface and freezes. This pushes up the road surface in cold weather. Once this thaws the void below collapse the road when traffic drives across the voids and fissures. Over time the road crumbles or collapses into the voids producing the pothole – initially quite small. Successively this process continues and the hole progressively gets bigger.  Once a weakness has formed as standing water in it will explode outwards under compression by a tyre further accelerating the growth of the hole through explosive percussion. Once the pothole is formed the surface with be loose and present a skidding risk as well as a hazard for all road users.